On October 4th, 2011, Apple announced it will be releasing the iPhone 4S, and not the much anticipated iPhone 5. This revelation has left many iPhone 4 users scratching their heads, wondering if the 4S is really worth the investment. Despite the name, the iPhone 4S is not just a tweaked version of the iPhone 4 – it has many new applications, features, and capabilities. There are plenty of reasons to take a long look at the 4S, many of which will be addressed here. 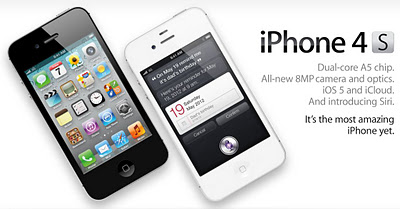 From a technical standpoint, the 4S offers a few significant upgrades. Not the least of all is the new A5 dual-core processor, which is purported to be a 7x increase in processing speed over the A4 processor.

In addition, the built-in camera offers 8 megapixels, versus the Iphone 4, which only offered 5 mexapixels. The increased resolution is further enhanced by the new hybrid infared filter, which improves the natural look of daytime pictures, and improves the quality of nighttime pictures as well. Furthermore, video resolution is also increased from 720p to a stunning 1080p.

The iPhone 4S will also allow global roaming, with the addition of chips for supporting GSM and CDMA networks. An automatically alternating antennae has also been added, removing the need for manul adjustments. With these new capabilities, users who are traveling globally will no longer have to switch phones to get service.

The iPhone 4S will also be the first phone to support Bluetooth 4.0, which offers low-energy technology. This allows manufacturers to replace proprietary sensor technology in their devices with the latest version of Bluetooth. It a nutshell, Bluetooth 4.0 allows any device to communicate with any other device, no intermediary required.

Probably the most talked about new application that the iPhone 4S offers is the Siri virtual assistant.

Considered by some to be a very basic form of artificial intelligence, significant advancements in voice recognition technology allow Siri to understand vocal commands clearly, despite background noise, and even interpret meaning and context. Siri goes way beyond simple “call mom” type commands, by performing functions that will literally make your life simpler and free up time. For example, it can access and report back information on local movie times, check calendars, and answer relatively complex questions.

Other New Features of the iPhone 4S

Two additional features that the iPhone 4S will offer are voice-to-text support, and FaceTime. Simply put, voice-to-text support dictates your messages by transcribing them into text. User speak into the microphone, send the message to Apple, and Apple returns the message in text form. FaceTime is a webcam-like feature that lets you talk to others in a real-time, face-to-face format.

In a nutshell, those users with an iPhone 4 may not be ready to upgrade yet, although there are a few very good reasons to do so. However, iPhone 3 users and iPhone newbees will likely be wowed by what they see, and probably glad they awaited the arrival of the 4S instead of opting for its predecessor.

September 9, 2014
Is the Macbook Air the Best Portable Laptop?

Is the Macbook Air the Best Portable Laptop?