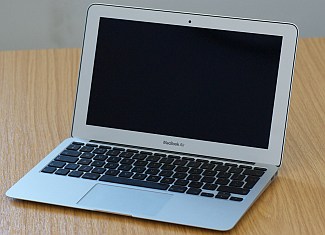 The Macbook Air runs much like the original Macbook, using Apple’s OS X and benefitting from preinstalled software such as iPhoto, Mail, Contacts, Calendar, iMovie and Garageband. It also shares features such as a built in camera and microphone. However, it also has some very notable features of its own.

Design: The first thing you’ll notice about the Macbook Air is the fact that it looks so sleek. It’s almost razor thin, and is Apple’s smallest laptop offering yet. In fact, it’s thinner than just about anything else, yet still keeps the distinctive Apple style with its unibody aluminum enclosure. It still features a full keyboard and Apple’s infamous trackpad for complete ease of use.

Here are the Air’s measurements: 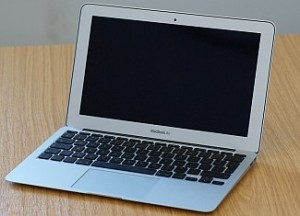 As you can see, it really is razor thin! It’s also half the weight of a standard Macbook, and a third the weight of the highest level Macbook pro. That makes it very easy to carry!

Battery Life: The battery life on the Macbook Air is impressive considering its tiny size. The battery will last between 9 and 12 hours when you’re using the Air, or for up to 30 days when left on standby.

Storage: The Macbook Air makes use of Flash storage – the same type of storage that’s used on the iPad and iPhone. Unlike a traditional hard drive, as used in other laptops and computers, flash storage is extremely fast and energy efficient. It’s also very small, which is why it’s perfect for the Macbook Air. You can get models with 128GB and 256GB storage capacity.

Graphics: The Macbook Air uses the same graphics as the Macbook: Intel HD Graphics 5000. This means that you’ll even be able to play traditional games available at el jackpotto on this device, just as you would with your Macbook or other laptop (except for using a CD port – see below).

CD/ DVD Drive: Put simply, the Macbook Air doesn’t have a CD drive due to its small size. Apple have helped to address this with the addition of a new feature that allows you to wirelessly “borrow” the optical drive of a nearby Mac or PC. Most users will already have an alternative home PC to use to install software and games, so this shouldn’t be a problem for most users.

Connectivity: The Macbook Air can connect to Wireless or Bluetooth networks, or you can use one of the two available USB 2.0 ports to connect a huge range of peripherals and computer accessories. There’s even a mini display port so you can connect your Air up to an external screen, and an SD card slot on the 13-inch version.

Choices: As with all the Macbook offerings, the Macbook Air gives you a number of choices of specs depending on your needs. This includes different storage options, as listed above, different screen sizes (11-inch or 13-inch), and stronger processing power for the 13-inch version.

Pros of the Macbook Air

There are other portable laptops out there – notably netbooks that run Windows – but none of them are as sleek and sophisticated as the Macbook Air. The design has been extremely well thought out, meaning that there’s no compromise on functionality and style, despite the small size and weight.

The fact that it’s so slim and light is a huge benefit for most. It can easily be slipped inside a regular bag or briefcase and carried around when you’re away from your main computer. It also allows you to carry on using the same programs and features as you would on your standard Mac, which a portable tablet such as the iPad wouldn’t.

Cons of the Macbook Air

For some, the lack of a DVD drive may be an issue, or it may at least put you off buying the Air initially. However, most users note that it makes them realize just how little they ever used the DVD drive in the first place. When you do need to use it, you can either connect wirelessly to a nearby PC’s drive using Apple’s new feature, download software from the internet, or make do with USB 2.0 connectivity.

The battery life also doesn’t quite match up to the other Macbook models. When something is designed to be this small, it’s hard to fit so much battery inside. Apple have done well with the design, but a 5 hour battery life on the 11-inch model may put some people off (compared with a 10 hour Macbook!)

Lastly, the flash storage and sleek design make for a Macbook that’s more expensive than the Macbook and Macbook Pro when you compare tech specs. Portability definitely comes at a price, but it’s a price that’s worth it for many people who already own a Mac and want something ultra-portable on the go.

What to Look For In a Laptop