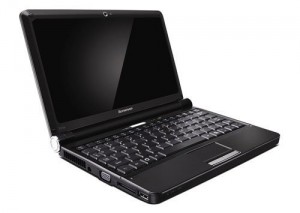 I am never one to be quick to the purchase technology but I finally a few weeks ago got a Lenovo S10 Netbook. We have all heard about netbooks and how they are the future or if you listen to Steve Jobs crap on them he will call them nothing compared to an iPad. Anyway I bought a shiny new Lenovo at WalMart a couple weeks back.

So why did I want a netbook? I have a work laptop, a desktop in my basement and access to my wifes laptop and another desktop in my daughters bedroom. No shortage of computing power, oh yeah my wife and I also own an iPhone and an iTouch as well. Well the simple answer is portability. I do not want to be carrying around a mouse, big balky laptop and a power supply and for a short jaunt away from the kids and wife I can have wifi as well as a way to type up blog posts, surf, or just collect some thoughts together.

My Lenovo S10 is good but average for a new gen netbook. The Lenovo has a 10 inch screen, 160 gig drive, 1 gig ram (upgradable to 2 gigs) and a 3 cell battery that lasts about 3 hours or so (for 45 bucks I could get a 6 cell on ebay though). The other great thing about the Lenovo S10 is that it was only $279 at WalMart and that is cheap for any computer and this thing is a real computer to me.

So here are my initial observations about using this Lenovo S10 Netbook:

Keyboard – Netbooks have small keyboards, I am getting used to it but I still trip over some of the keys.

Touchpad – The touchpad is a little small as it needs to be but I have gotten used to this really quickly so I don’t mind it at all anymore.

Weight – These netbooks are light and small. I close the lid and it is as small and light as a book so it is easily transportable.

Performance – I have gotten used to everything being really fast. I initially got the Lenovo S10 with Windows XP but quickly swapped it over to Windows 7 and the new Office 2010 and it is very fast. I moved over my Firefox settings and everything is still quick even with all of the extensions I use in Firefox. Google Chrome is really fast. The video is actually really good and although I would never consider this a gaming device it does have a VGA connection and will give you great resolution on an external monitor.

Data Portability – I have lots of space on the hard drive but was initially worried about access to other machines and the data so I experimented with Drop Box, Evernote, FTP, file shares, and even Sky Drive from Microsoft, but have settled into just copying stuff to my desktop and using that as the central space for everything.

Usage Pattern – I have been using the netbook mostly for surfing and blog commenting as well as facebook and Twitter and I hop online at work to the unsecured wireless to watch World Cup Soccer. I did watch a movie in bed on it using a downloaded movie and VLC Player to watch the movied with headphones and it was great. One thing that I have found great is auto hiding the taskbar as the 1024×576 resolution is not very nice to look at with a taskbar there, you just lose to much room on your screen to accept the sacrifice.

Windows 7 support – The Lenovo S10 was build with and for Windows XP so I did have to just accept what Windows gave me for drivers and they did a really good job of it. I looked at the drivers that were being used originally for Windows XP and did get the Windows 7 version of those drivers which was great for the Wireless card as well as the Sound Card.

You can probably tell that this is not really a review of the Lenovo S10 but more an ode to it. I am really happy with my cheap purchase and wish that I would have jumped into the netbook market a lot sooner. I do not think that my new netbook has any chance of completely replacing the desktop or laptop for me because of the small keyboard size (unless I but an external keyboard) but the lenovo s10 fits into my lifestyle well.